Welcome to Grand Gimeno's official blog, where you'll find a chronicle of our events, cuisine, and artisan designs.
‍
Can't find what you're looking for? Check out our blog archive. 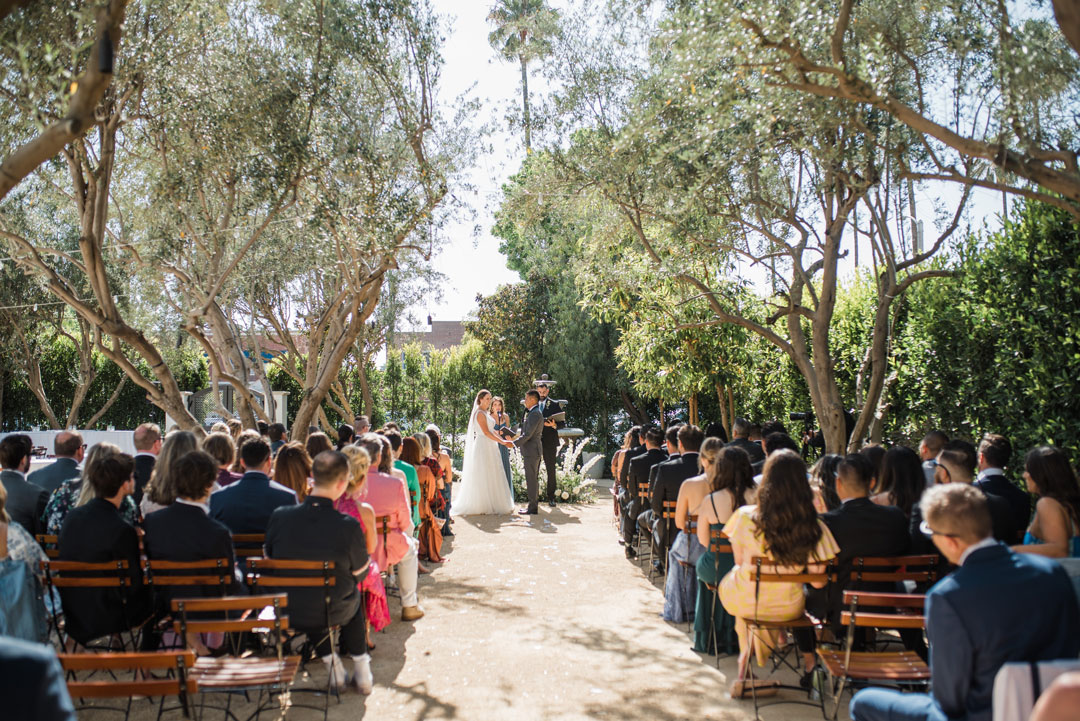 After a few mimosas and a full rotation at the beauty bar, Christina and her girl gang were ready for the big day! Shoes were slipped on, a veil was secured, and jewelry completed the bride’s wedding day look before she met her groom for their first look. Meanwhile, across the Foyer, Freddy suited up with his groomsmen. After pinning his boutonniere on, he headed to the Courtyard to await his bride. With a tap of the shoulder, Freddy turned around to see Christina for the first time that day. A smiled filled her face as happy tears filled his eyes. Bridesmaids and groomsmen watched from each suite through the windows as the couple complimented one another, hugged, and kissed. Christina and Freddy were then joined by their wedding party for group photos before lining up for ceremony.

Guests arrived in the Olive Grove at Grand Gimeno and took a seat under the shade of nearby trees. White flowers and greenery marked the head of the aisle where our Spanish fountain stood, and bistro chairs were lined up in rows. As soon as everyone was seated, Freddy made his appearance followed by bridesmaids and groomsmen and ending with Christina. Tears filled Freddy’s eyes once again when Christina made her walk down the aisle taking her place next to him. In front of their closest friends and family, the bride and groom read personalized vows, exchanged rings, and sealed the ceremony with a kiss.

Just as the ceremony ended, fresh, Wood-Fired Neapolitan and Meat Lover’s Pizzas were being pulled from the Olive Grove oven. Guests were immediately drawn to the delicious smell and lined up for a slice. In addition to pizza, Chicken Jalapeno Empanadas and Polotè were tray passed to hungry guests. Refreshing beverages were shaken and stirred at the bar including the newlywed’s signature cocktails, an Old Fashioned, French 75, and Cadillac Margarita as everyone mingled. Before long, guests were asked to take their seats for dinner.

In the same space as cocktail hour, guests found their assigned tables for reception. Spanish tiles, citrus fruits, and fresh floral centerpieces topped each table creating summery tablescapes. Once everyone found their seats, Christina and Freddy made their grand entrance in a cloud of smoke! They shared their first dance while everyone stood and cheered, then took a seat at their sweetheart table. Ensaladas Las Mesas, Handmade tortillas, Slow Roasted Carnitas, Chicken Fajitas, Refried Beans, and Spanish Rice were served as soon as toasts began. The menu was selected by the bride and groom with help from our Event Specialist, Sierra, during their planning process. Classes clinked in the air as each speech concluded, then it was time to cut some cake and eat dessert! The newlyweds privately cut into their personal-sized carrot cake with cream cheese filling, then invited their guests to indulge in the Latin Dessert Station which housed an assortment of petit tres leches cakes, mini caramel custard flan, coconut macaroons, dulce de leche chocolate tarts, and Mexican wedding cookies. Filled with love (and sweets), guests hit the dance floor to show off their best moves. Dance-offs and dance circles formed, and the groom was tossed in the air a few times by friends before the evening came to a close. Well wishes were shared as guests said their goodbyes and headed home.
‍

A Bubbly Exit at Grand Gimeno

Ready to book a tour? Simply fill out this form and we will be in touch.
Great– we will review your submission and get back to you!
Oops! Something went wrong while submitting the form! Please check your entries and try again.